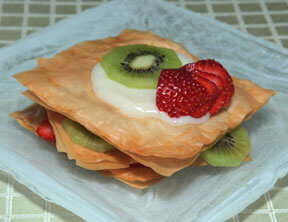 In a medium saucepan over medium heat, warm two cups of  milk, vanilla extract and agave syrup/honey until just before boiling. In a small bowl, mix the cornstarch with the remaining ¼ cup of milk. Add this mixture to the heated milk mixture while constantly stirring and continue to heat at a simmer for five minutes or until thickened.  Cool and refrigerate.

Unroll and cover phyllo sheets with plastic wrap, then a slightly damp towel to prevent drying out. Place one sheet of phyllo on work surface. Spray lightly with cooking spray. Layer and repeat with six additional sheets of phyllo. Cut in half lengthwise. Cut each half horizontally into thirds, creating six, 4 ¼-inch squares. Repeat this process to create 12 phyllo squares.

Place phyllo squares on an ungreased baking tray with a second baking tray pressed over the top to prevent the phyllo from curling up. Bake 5 – 10 minutes or until crisp and lightly browned. Check occasionally for doneness. Remove and cool.
Place a cooled phyllo square on a plate. Top with 1/4 cup of  vanilla custard and  4  strawberry slices. Cover with a second phyllo square and  top with 1/4 cup custard and 4 kiwi slices. Place another phyllo square on top, spread with custard  and garnish with berry slices. Repeat three times to create four napoleons. Serve immediately.

Tip: Instant non-fat, no sugar pudding can be substituted for the custard. 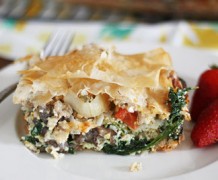 Created by Girl Versus Dough

Perfect for brunch gatherings, this casserole features a flaky phyllo crust and a filling that includes eggs, turkey, mushrooms, spinach and two cheeses. 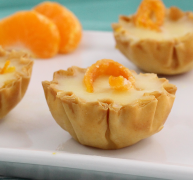 Looking for mini tart shells recipes? Try these Vegan Tropical Tarts. They are sure to add zest to your next party.