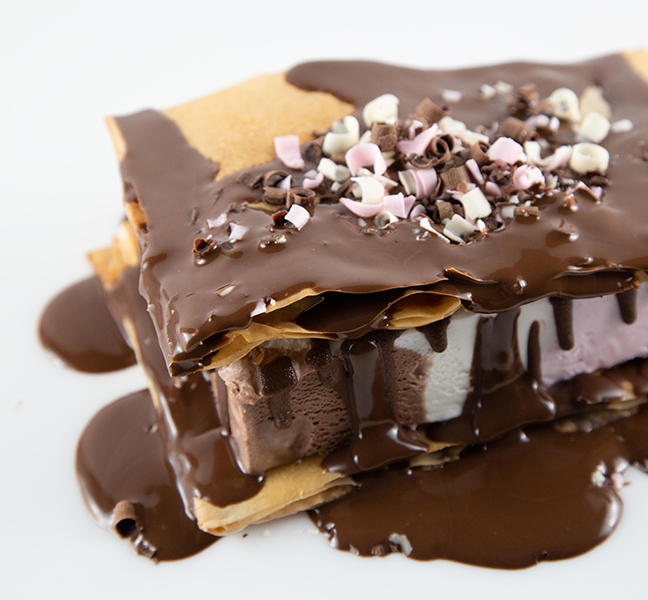 All you need is ice cream. Especially when it’s Neapolitan ice cream, layered between golden layers of flaky phyllo and drizzled with chocolate.

Unroll and cover phyllo sheets with plastic wrap, then a slightly damp towel to prevent drying out. In a small bowl, whisk together egg white, 2 tablespoons olive oil and water. In another small bowl, combine cinnamon and sugar. Place one sheet of phyllo on baking sheet. Lightly brush with egg mixture and sprinkle with cinnamon/sugar mixture. Layer and repeat with 9 more sheets but brush the top layer with olive oil instead of egg mixture and sprinkle with cinnamon/sugar. Using a pizza cutter or sharp knife, cut phyllo in half lengthwise and into fourths widthwise yielding 8 rectangles 4.5” x 3.5” each. Bake for 15-20 minutes or until golden brown. Remove from pan and cool.

Prepare ice cream while phyllo is baking. Remove ice cream, as a block, and place on cutting board. With a sharp knife, square off the block of ice cream so it is approximately 4.5” long x 3” high. Cut into 4 – ¾” thick slices so that all three colors are in each slice. Each cut slice should be approximately 4.5” x 3” x ¾”.

• Ice cream sandwiches may be assembled and stored in airtight containers in the Freezer for 2 days.
• The protein in the egg whites holds the phyllo layers together. 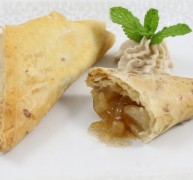 Enjoy these comfort sweet phyllo desserts with people close to you for an amazing culinary experience. 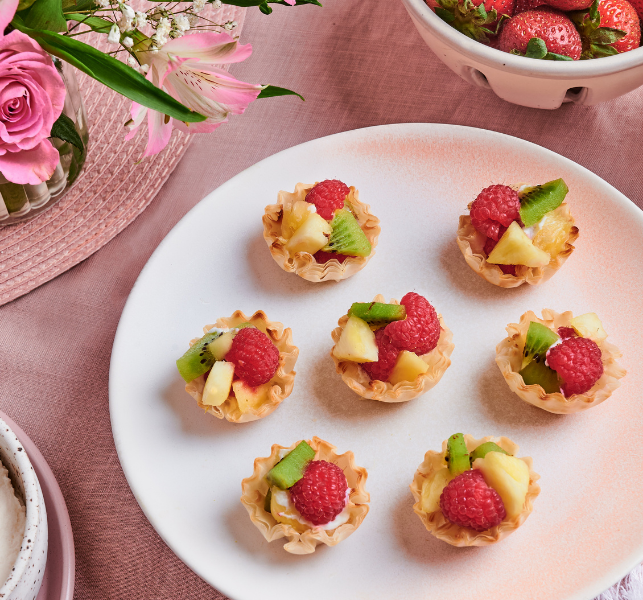 These cute little cups turn up the volume on basic fruit salad. Pineapple, kiwi and raspberries come together for a taste of the tropics, but you could use any in-season fruit you like.