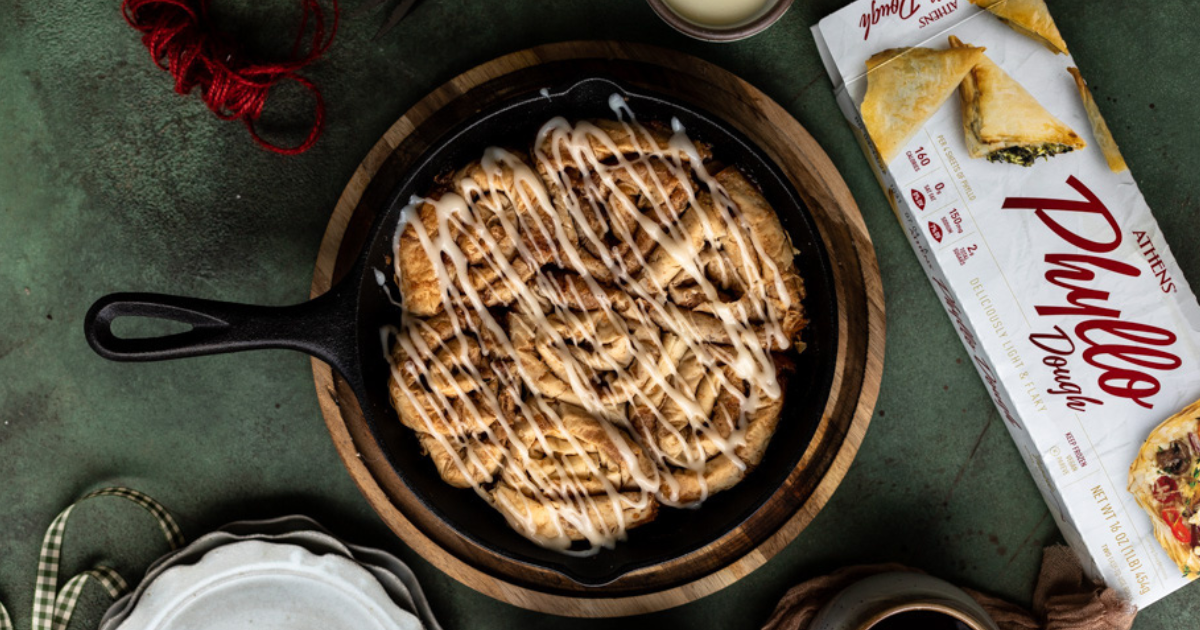 It’s the most wonderful time of the year – and we’ve got visions of these sweet cinnamon rolls dancing in our heads. Sam from Frosting and Fettuccine blog brought us these delectable, crispy phyllo rolls that are a unique alternative to traditional cinnamon rolls. “If you have been looking for a new, fun dessert to try that won’t take you hours to make, this is it!” says Sam. Read on for her step-by-step guide.

These deliciously sweet rolls are made using Athens® Phyllo Dough and are filled with a mixture of brown sugar, butter, and cinnamon. Bonus: they’re baked in a cast iron skillet for easy serving and less clean-up. So much quicker than slaving over a yeasted recipe!

What I love about this recipe is how crispy and flavorful every bite is. Each sheet of phyllo dough is coated with the buttery sweet mixture, then rolled together to create that perfectly swirled roll. 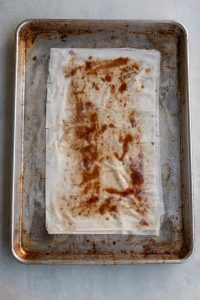 Another great thing about this recipe is that it only includes a handful of ingredients: 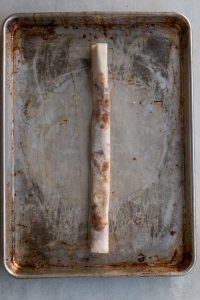 First, be sure to bring both phyllo dough rolls to room temperature so they are completely thawed. If you don’t, you risk the dough cracking. Preheat the oven to 375°F and grease an 8” cast iron skillet.

In a saucepan over low heat, melt the butter, brown sugar, and cinnamon. Be careful it doesn’t boil or else it will harden. Unwrap and unroll the thawed phyllo dough rolls. To keep the phyllo from drying out, immediately cover it with plastic wrap, then a slightly damp towel. Uncover to remove sheets as needed, and then promptly recover. 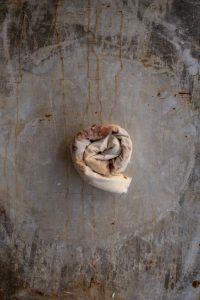 Brush 1 sheet of phyllo dough with the melted butter mixture. Stack another sheet of phyllo dough on top and brush it with the mixture. Repeat 3 more times so you have a total of 5 sheets stacked. Roll the sheets into a long log, then roll the log into a spiral to achieve the cinnamon roll shape. Place roll in cast iron skillet. Repeat this process until you have a total of 7 cinnamon rolls. Bake rolls for 20-25 minutes or until the edges are crisp and golden.

While the rolls are baking, make the cream cheese frosting. Mix together the cream cheese, powdered sugar, and milk until smooth. When the cinnamon rolls are out of the oven and have slightly cooled, drizzle the frosting over them and enjoy!

For best results, make and serve this recipe the day of. If kept on the counter and covered tightly in plastic wrap, the rolls can still be eaten the next day.  I do not recommend storing the rolls in the fridge or freezer. 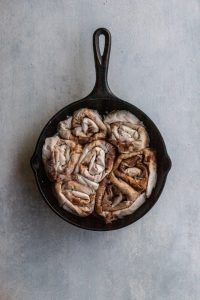 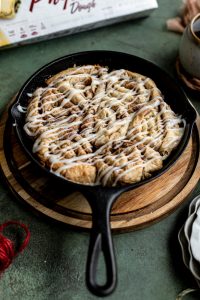 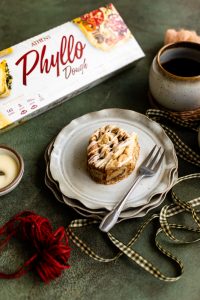 In a saucepan over low heat, melt the butter, brown sugar and cinnamon. Place 1 sheet of phyllo on work surface. Lightly brush with melted butter mixture. Layer on 4 more sheets, brushing each sheet with the butter mixture, resulting in a stack of 5 total sheets.

Roll the stack into a long log, then roll the log into itself to form a spiral, achieving the cinnamon roll shape. Place roll in skillet. Repeat this process 6 more times to make a total of 7 cinnamon rolls. You may have to slightly squeeze them into the skillet to fit. Bake the rolls for 20-25 minutes, or until golden brown.

To make the cream cheese glaze, combine the cream cheese, powdered sugar, and milk in a bowl. Mix together until smooth. Once the rolls have slightly cooled, drizzle the glaze over top. Serve immediately.

For more phyllo dessert recipes, check out our Pinterest page or our recipe library. Be sure to sign up for our newsletter for monthly inspiration as well! 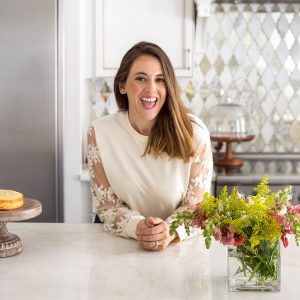 About Sam
Sam Adler is Le Cordon Bleu-trained pastry chef who loves to bake! Her site is a place where you will find impressive yet achievable dessert ideas and recipes. Follow her on Instagram, too!