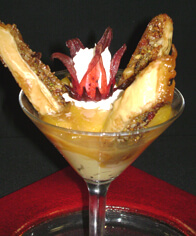 For honey, in a medium saucepan, combine honey with anise seeds, cinnamon sticks, cloves and nutmeg. Heat over low heat for 5 minutes to allow flavors to combine.
For candied nuts, in a medium saucepan, simmer pistachio nuts in simple syrup for 4 to 6 minutes until nuts start to brighten in color. Drain and fry nuts in a fryer for 60 seconds or until golden brown. Chop nuts finely. Repeat process with Macadamia nuts.
For baklava filling, in a small bowl, combine nuts, chopped hibiscus flowers (or ¼ cup pomegranate syrup) and up to ¾ cup spiced honey to make a thick, pasty spreadable mixture.
Place 1 set (5 sheets) thawed Athens® Ready-to-Go Phyllo Dough on a work surface. Brush surface with clarified butter, then layer with a second set (5 sheets) of Phyllo Dough. Spread a 1½-inch strip of the nut mixture along the long side of the Phyllo dough. Fold the dough just over the filling and spread another strip of nut mixture along the fold. Then fold the entire strip to enclose. Transfer strip to a sheet pan lined with parchment paper. Cut strip into 12 equal pieces on the bias, but do not separate. Bake in at 400°F until golden brown, or 10 to 12 minutes. Let cool before handling.
For peaches, in a small saucepan, melt butter with ginger, cinnamon sticks and anise seeds. Cook over medium-low heat for 3 minutes. Add peaches, cook over medium heat until fork-tender, 5 to 7 minutes. Stir in brown sugar and, if peaches are too tart, add granulated sugar. Remove from heat, cool, remove cinnamon sticks and anise seeds, chill until needed.
For whipped cream, in a small bowl, whip together whipping cream with granulated sugar and vanilla.
To serve, pipe whipped cream into the bottom of a martini glass. Top with a layer of chilled poached peaches. Place 3 pieces of baklava around the martini glass. Pipe a rosette of whipped cream in the middle of the poached peach and decorate with an edible hibiscus flower. 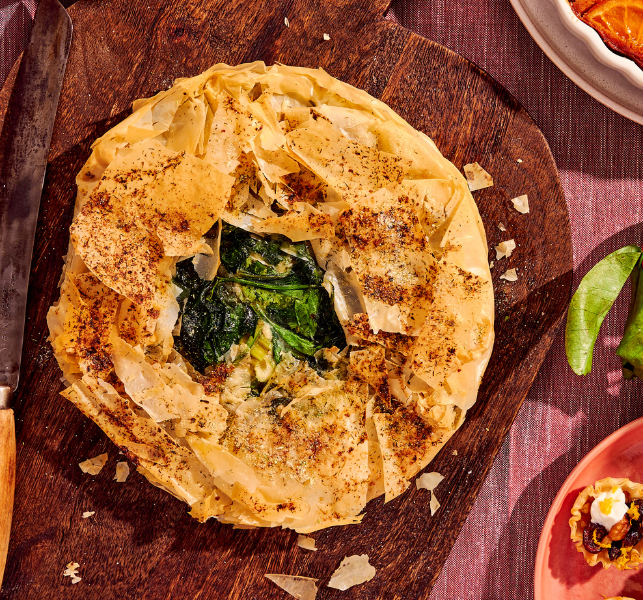 Not Your Yia Yia’s Spanakopita

Fresh spinach, kale and leeks layered with feta and cottage cheeses and tucked into flaky phyllo dough make for a light delicious meal.

This refreshing fruit-filled dish is almost too pretty to eat. But it won’t take long until you’re reaching for one after another of these fruity tarts overflowing with raspberries and kiwi.